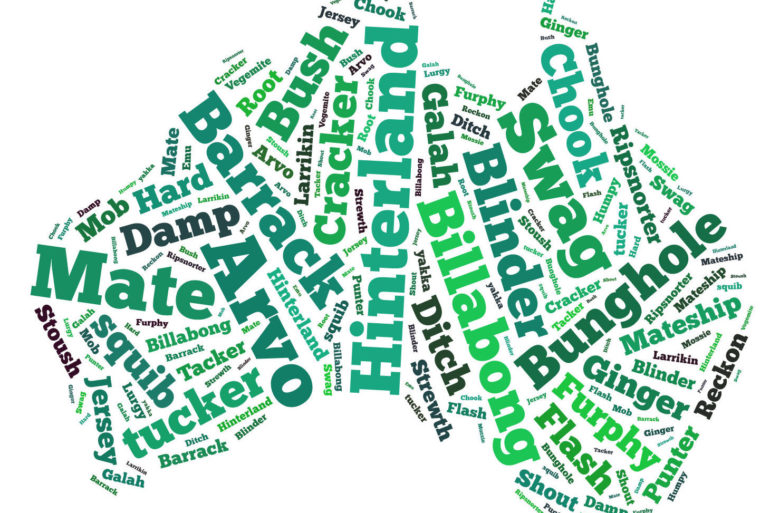 Photo by Ron Mader, via tagxedo.com

Words and phrases you may encounter in Australia and New Zealand

Aboriginal — (adj.) relating to Australia’s indigenous people (note: “Aborigine” is an outdated term, and calling an Aboriginal person an “Abbo” is an insult)

Anzac — (n.) initially the Australian and New Zealand Army Corps, but now a word meaning “soldier” in general, because of the courage and virtue of the volunteer Anzac soldiers who died at Gallipoli in WWI in 1915; Anzac Day is a public holiday in both Australia and New Zealand, observed on April 25 each year

Aussie rules — (n.) Australian rules football; a sport kind of like rugby, often played on a modified cricket ground; honestly, I still don’t understand the game or know how it differs from rugby, but don’t expect it to be anything like American football or regular football (aka. “soccer”)

Barbie — (n.) barbecue, either referring to the grill itself or the barbecue event as a whole

Barrack — (v.) to “root” for a team (NEVER say that you’re “rooting” for a team, because that means something entirely different…)

Brissy — (n.) nickname for the Australian city of Brisbane

(the) Bush — (n.) the countryside; when you travel a couple hours inland from a big city, you’re in the bush

Cark [it] — (v.) to break down, die; usually used with inanimate objects

Cheeky — (adj.) brazen or irreverent, usually in an endearing or amusing way

Chips — (n.) can either mean French fries or potato chips

C**t — (n.) ok, so most people know what this word means, but it’s included here because the connotation of the word is very different in Australia (and probably New Zealand, too) in that the word is far more common and less offensive; it can actually be used playfully with friends and even some family members; if someone calls you this word (and you haven’t done anything wrong), that’s a good thing — it means they consider you a friend

Drop bear — (n.) a myth made up to scare tourists — it’s a koala photoshopped to look angry, and mischievous  Australians will tell you that they drop from the trees and attack you; don’t be fooled — they’re not real

EFTPOS — (n.) “Electronic funds transfer at point of sale”; the electronic system for paying with cards in Australia and New Zealand; it works just like swiping your card anywhere else, but for the longest time I had no clue what people were talking about when they said “EFTPOS” so I thought others might want to know

Fair dinkum — (adv.) true, genuine; this phrase is used to emphasize these qualities

G’day — (greeting) ah, “g’day” — meaning “good day” — is the most stereotypical phrase in all of Australian culture; while foreigners often have the impression that Australians say “G’day” all the time (Thanks, Crocodile Dundee), it’s actually not a very common phrase among the younger generations in Australia; however, the greeting has stuck around in New Zealand, where you’re surprisingly more likely to hear it; as a rule of thumb, I’d recommend only saying it back after someone says it to you

Gladdy — (n.) nickname for the Australian city of Gladstone

Goon — (n.) cask wine; often drank by the youth straight out of the silver goon bag that’s inside the box

Hotel — (n.) sometimes actually a hotel, but oftentimes, an establishment called a “hotel” is a bar

Kiwi — (n.) a person from New Zealand; it’s not offensive at all — the term “Kiwi” is used with pride and endearment; the name comes from the native kiwi bird, the national animal of New Zealand

Macca’s — (n.) McDonald’s; this isn’t just slang — the official McDonald’s Australia website even uses the term to refer to itself

Mate — (n.) a friend; can have different meanings as an address, depending on the tone, though

PayWave — (n.) the ability to pay simply by waving your card over the machine; cards in Australia and New Zealand do this, but a lot of international cards (including American ones) don’t; if you see a cashier waving your card in front of the machine and they look perplexed because nothing is happening, tell them your card doesn’t do payWave

Petrol — (n.) gasoline; don’t ever say you’re “getting gas”, or else people will think you’re farting

Prawn — (n.) a shrimp; do NOT say, “Throw a shrimp on the barbie” under any circumstances because Australians use the word “prawn” instead

Root — (v.) to have sexual intercourse; do NOT saying that you’re “rooting” for a team

Seedy — (adj.) physically out of it, as when hungover; OR, sleazy

She’ll be right — (expression) everything will be alright

Sickie — (n.) a sick day from school or work, because of real or faked illness

Sweet as — (exclamation) sweet, awesome; Australians add the “as” to give emphasis

Tassie — (n.) nickname for the Australian island state of Tasmania

Thickshake — (n.) a milkshake; if you order a “milkshake”, you might get something thinner/more watery than what you really wanted

Thongs — (n.) sandals, flip-flops (NOT underwear — a fellow American friend was very alarmed when his lab supervisor at the university said she had to take off her thongs before beginning an experiment. She meant that she needed to wear closed-toed shoes.)

Tradie — (n.) a tradesman; many specific tradesmen have their own nicknames, too (see: “ambo”, “garbo”, “sparky”, “truckie”)

Uni — (n.) university; don’t say “college” to refer to a university, since they’re not the same thing (a college can only grant certificates or diplomas, not degrees)

Wanker — (n.) a person who is obnoxious and annoying, and/or self-indulgent and self-centered

Whinge — (v.) to whine or complain

Woolies — (n.) short for Woolworths, one of the two main grocery store chains that dominate Australia

Zed — (n.) the letter “Z”; really, most of the English-speaking world pronounces it this way except for Americans

This is an ever-expanding list. Know any useful and/or funny Down-Under words or phrases that we missed? Leave a comment below and let us know!