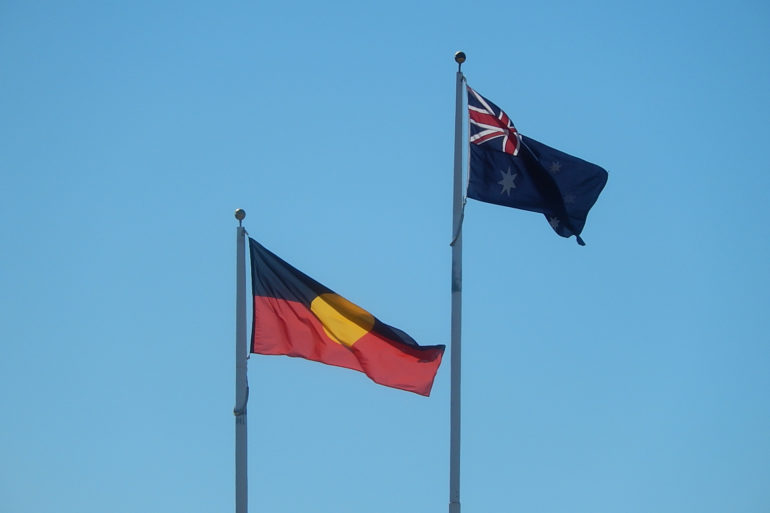 On the first day of classes at the University of Queensland, Professor Condy Canuto began his course, Indigenous Australian Issues: Past, Present, and Future (ABTS1000), with a special presentation like he does every semester. As the presenter, Steven Coghill, approached the auditorium stage, Canuto told his students that if they don’t yet realize the significance of what they’re about to witness, he hopes they will when they reflect back on it later. Coghill, a descendant of the Yaggera people — the traditional owners of the land on which Brisbane sits — was here to formally welcome the students onto his people’s land. He gazed into the audience of about 100 students, mostly international, and said, “We welcome you with love,” before switching to Indigenous languages for the rest of his speech. He then sang two songs, one performed with two boomerang sticks and the other accompanied by hand gestures. The students hardly had a clue what exactly Coghill was saying, but their eyes remained transfixed on him as he gave his ancestors’ blessing for the class to proceed.

This ceremony is called a Welcome to Country, a tradition dating back thousands of years to when tribal groups would welcome others onto their land. Indigenous Australians’ deep spiritual connection to their land, which they call “country,” is behind the tradition. “We’re spiritually connected to our country. If you maintain the land, the land will look after you. We belong to it and it belongs to us; we are it, it is us” Coghill explains. The practice of formally requesting and granting permission to set foot on someone’s land rests on the principle of respect — for the land, its owners, and the elders past and present, Canuto explains. “It was always customary to ask permission and give respect. Usually if there was nothing major happening or ceremonies or anything like that, it was all good. We’re still practicing that today,” Coghill says.

Coghill, who studies criminology and Indigenous studies at UQ, grew up on North Stradbroke Island just northeast of Brisbane. The concept of asking for permission to go to certain places on the island was part of his upbringing. For example, Stradbroke has two sacred lakes, Blue Lake and Brown Lake. Blue Lake is a man’s lake, so women aren’t allowed to go there without permission, Coghill explains. However, even though men can go there, they can’t swim in the lake, and no tourists, even men, are to go there at all even though it’s technically part of a national park. The rules for Brown Lake work the same way, but with women giving the men permission. “If I wanted to go there, I had to ask one of my old aunties. Sometimes they’d say, ‘No, not today,’ or they’d say, ‘Yes, alright; make sure you pay your respects first,’” he says.

But while Welcome to Country is a longstanding practice in Indigenous culture, the concept is relatively new in the non-Indigenous context, only becoming more common within the last 20 years or so. Some politicians — Peter Beattie, the former Premier from Queensland, for instance — heavily promoted the idea in order to bridge the gap between Australians of European descent and the Indigenous people. Despite having only about 60,000 Indigenous Australians out of Brisbane’s one million-plus population, southeast Queensland actually has the nation’s largest Aboriginal population (by number of residents, not by percentage), which gives even more reason for the acknowledgment of the Indigenous population than in some other places. A Welcome to Country is given anywhere that has significance, like festivals and conferences, and for the past several years, a ceremony is performed annually at Parliament. And in situations where there isn’t an Indigenous person present to perform a ceremony, a non-Indigenous person may give an Acknowledgment of Country, which simply entails reminding everyone in attendance that the event is occurring on Indigenous people’s land. “It’s part of the goodwill that the local traditional owners show in having non-Indigenous people come and dwell on their land,” Canuto says.

In explaining the particular ceremony Coghill performed for the ABTS1000 class, he and Canuto especially focus on the songs. “He presented a gift, and that’s really important. In any welcome, you gift somebody, and that gift he gave was the song,” Canuto says. For the song with the boomerang sticks, Coghill performed one of the oldest and most popular welcome dances in southeast Queensland, narrating the Nami in the language of the Gabi Gabi people from the nearby Sunshine Coast. He says that the sticks take on a different meaning during the song. “They’re instruments of war, but they’re also used as instruments of love and respect,” he explains. The second song, which Coghill sang in he Yaggera language, tells the story of who he is and where he’s from, from the Yaggera perspective, and what it means. “When I see Steven, it’s a very spiritual experience, especially when he sings the song,” Canuto says. “We can do what we do knowing we got the blessing of his ancestors, [saying], ‘Come into our house; make yourself at home.”

Coghill gave his first Welcome to Country when he was in his 20s. The practice was taught and delegated to him. Since then, Coghill has performed too many to count. “How long is a ball of string?” Coghill responds with a rhetorical question when asked exactly how many. He also can’t pinpoint exactly when he witnessed his first Welcome to Country, but he knows he was pretty young, with his father, uncles, and aunties doing them often throughout his youth.

While Canuto, who was born in Cairns, has never performed a Welcome to Country on his ancestors’ traditional land in the Torres Strait Islands in Far North Queensland, like Coghill, he has seen so many that he can’t even remember when or where the first one was, though he suspects that it was 10 or 15 years ago, probably at a conference of some sort. When he watches a Welcome to Country, Canuto experiences a range of emotions. “It’s a sense of pride, belonging, honor, the sense of goodwill,” he says.

Coghill shares these sentiments, and in addition, he feels a strong sense of respect whenever he witnesses a Welcome to Country because non-Indigenous Australians are watching and listening to the country’s native people after 200 years of disrespect. He says that Welcome to Country ceremonies represent Indigenous Australians’ resilience. “It shows people today that we are still a staunch and proud, dignified people and that we haven’t been conquered,” he explains. “We’ve gone through hell and are still here today. That’s how strong we’ve become. We have fought with weapons in the past, but now there’s fighting in a spiritual way, where education is the key, the shield against ignorance. For me, that’s resilience, and I will promote that, always.”

However, some Australians, whom Coghill refers to as the “ignorant bogans” — the uncultured, “redneck” types — take offense to the idea of Welcome to Country because it brings up the issue of who really belongs on this land. “It plays on their complex of guilt. They think, ‘That was 200 years ago. I had nothing to do with that.’ So what have you done then, to educate yourself, to give respect?” He asks. “They don’t think they have to. They only have their perspective. If you’re black, watch your back. If you’re white, you’re right. That smug attitude here in Australia is rampant.”

Coghill insists that you aren’t indigenous to where you were born, but to where your ancestors are from, which would mean that Australians of European descent can’t call themselves Australian. “Bottom line is, they call Australia home, but for several generations they’ve lived on stolen land on borrowed time and made no form of compensation or respect,” he explains. “Do what you have to do to do that. Justice makes everyone equal, and in this country, we’ve lacked justice for over 200 years.”

Welcome to Country helps pave the path towards equality through recognizing past injustices, but there is a concern that the increased frequency of Welcome to Country ceremonies dilutes their sincerity and meaning. “We do run the risk of that now, where every event you do has to have a Welcome to Country. For others, especially those from the non-Indigenous perspective, it could lose its sense of what it’s actually there to do and provide.We don’t want to trivialize it,” Canuto says. However, at least from the Indigenous perspective, Canuto says that the Welcome to Country still serves its purpose. “We see it as the cultural protocol, not necessarily a procedure like ticking a box,” he says. When asked how frequently he believes is often enough to welcome everyone onto the land, Canuto says he doesn’t like to put any constraints on it. “If someone wanted to do it and felt that it was important, then they could do it, but I wouldn’t put that onto them. It wouldn’t make them righter or wronger,” he explains.

Coghill takes a stricter approach, insisting that performing a Welcome to Country is always necessary in order to give the proper respect. “It must be done, must be said, no matter how many people are there. For a foreigner, if Condy didn’t give acknowledgment to the country and the traditional owners, he’d be looked upon as disrespectful. We give respect to our ancestors past and present because they made us; they taught us the way. It’s all about respect, honor, and loyalty, three of the main things that make up the foundation of our culture,” he explains.

Canuto is surprised that no similar acknowledgment is regularly given at the United States Congress or in American society in general. “I didn’t realize — I had just assumed that when it comes to Native Americans, yous would be far more advanced in the sense of where yous are,” he admits. Native Americans aren’t at the forefront of societal consciousness as much as Indigenous people are in Australia. Imagine going to any major public event and having it start out with a reminder that Native Americans once owned the land on which you’re standing. Perhaps the lack of such protocol in America has to do with the fact that Native Americans live on designated reservations now, while Indigenous Australians actually never ceded their sovereignty.

Australia’s treatment of its indigenous people has often been even more brutal than what happened in America — 2017 was just the 50-year anniversary of the referendum that officially recognized Indigenous Australians as people — but at least today, the issues they face are actually a part of public discourse. While in America, there’s debate over whether or not Columbus Day should be renamed to Indigenous Peoples Day, Australia already has a week-long holiday celebrating its indigenous people. Every year, the first week of July is National Aboriginal and Islander Day of Celebration (NAIDOC), a week full of festivals and demonstrations.

[some kind of ending]