A chance encounter at an indigenous New Zealand village leads to an unforgettable experience.

As the sun begins to set on day two of my solo backpacking trip around New Zealand in June 2017, I’m standing under the arched wooden gateway to Muruika, a memorial cemetery honoring the Maori soldiers who died fighting for New Zealand in World War II. The cemetery juts out into the clear blue water of Lake Rotorua, on whose shore the nation’s indigenous Maori people established the village of Ohinemutu — and ultimately the surrounding city of Rotorua on the North Island — over 1,000 years ago. A sign under the gate says in both English and Maori that this is a “sacred site.” Out of respect I admire the rows of porcelain white, raised coffins from afar. Ohinemutu is one of only two Maori villages left in New Zealand, and today, I just happened to wander in. 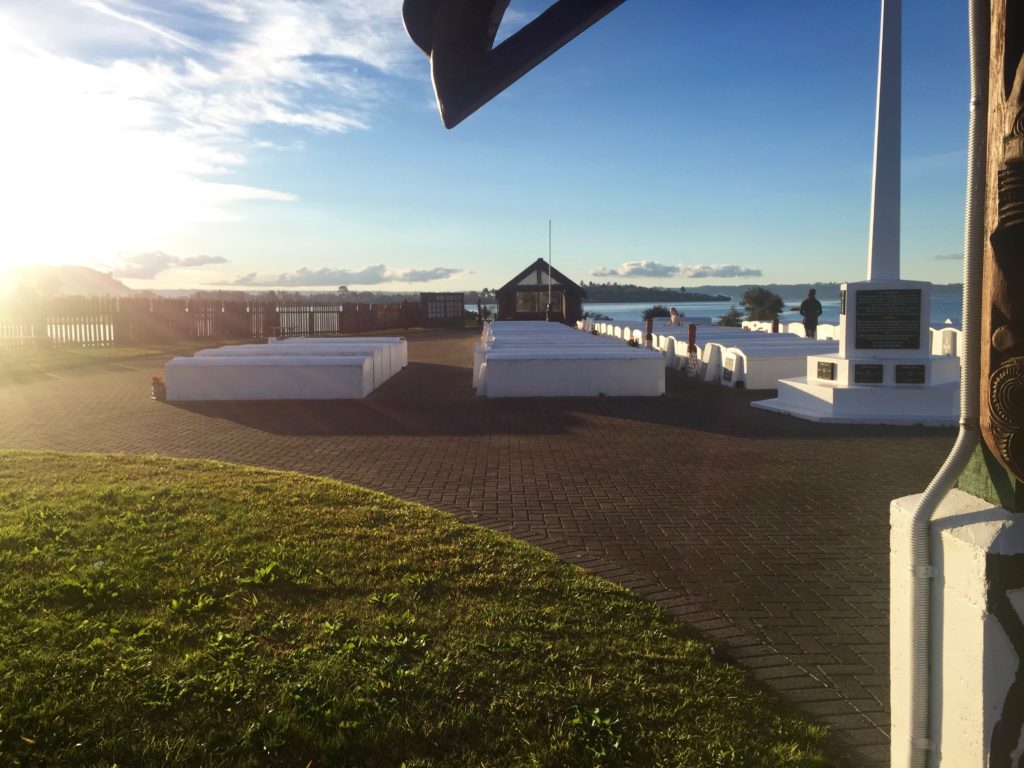 Nearby, a man sporting a Cleveland Cavaliers cap talks to a brunette woman nodding along silently. Wondering how this fellow tourist knows so much about Maori culture, I eavesdrop and realize he is actually Maori. He appears to be a tour guide. I inch over to them and ask if I can join. “Kia Ora,” the man greets me, and with a bright, infectious smile, he introduces himself as Shaloh Mitchell.

Shaloh tells the brunette and me that his family has lived in Ohinemutu for 23 generations. He looks into our wide eyes and repeats, “Yes, 23,” adding that he can trace his Maori heritage back an additional 16 to around the 10th century. “After that we get a bit lost,” he says as continues his tour. We turn around and walk back into the center of the village, a fenced-in square called a marae. To our right is St. Faith’s Anglican Church — a white chapel with red trim — and facing it on the opposite side of the square is the tribal meeting house, Shaloh points out to me as we keep walking. He then leads us past a small log that demarcates the boundary between public and private space.

As we walk along the paved path, I notice steam rising from several of the houses in the village. Because this region is home to some of the world’s most intense geothermal activity, the pungent scent of rotten eggs lingers in the air — sulfur. Houses here can’t be built directly on the ground, nor can coffins be buried, since geothermal springs can erupt at random. We walk into someone’s yard and stop next to one such pool, walled off by shoulder-high planks of reddish wood. I can hear it bubbling. Maori use the water for cooking and bathing, but tourists shouldn’t climb into any hot spring they see, Shaloh warns. Still stopped, Shaloh gestures towards the communal bathhouses scattered around the village, small shack-like structures painted various colors. He explains that the hot spring water, ironically said to have healing powers, can cause third- degree burns, so they have to mix it with colder water. However, cooking with the unfiltered spring water is safe. Shaloh claims he makes the “tastiest veggies ever” by wrapping them in a cheesecloth and tossing the bundle into the hot spring to cook. Then he directs our attention to a crater in the ground a few feet away from where we stand. Steam flows from this hole covered with a grate. Shaloh identifies this as a pit oven Maori use to cook a traditional hangi meal — a large bundle of meat and vegetables — a process that takes hours. My stomach grumbles at the thought of getting a taste, but we leave the yard and return to the path.

“People come here, and they expect to see us walking around in grass skirts with tattoos on our faces living in thatched huts.”

We reenter the marae, and the tour ends at the most distinctive structure in Ohinemutu: the Tama-te-Kapua meeting house. With a statue of the tribe’s paramount chief at the top, the meeting house’s red walls are covered in ornate carvings of all the village ancestors. Their iridescent paua shell eyes stare at me from their red faces, with lips snarled and tongues out, dotted, tattooed, and scarred. If the men cried while getting these lines etched into their faces — each of the three cuts was made after the previous one had only partially healed — they were undeserving of this mark of pride, Shaloh says. Nevertheless, I’m still fixated on the shells. No matter how dark it is — I realize as the sun sinks further into the horizon, painting the sky a creamsicle orange — you can always see those eyes.

This building was once only for the chief, Shaloh explains, but now it hosts tribal functions like communal sleeping after funerals. I ask him who the current chief is. His answer: no one. His grandfather was the last village chief, and he never named a successor. Shaloh reveals to us the chief’s last words, said to the council of elders immediately before his last breath, “None of yous is worthy of being chief.” Now the village waits for a deserving leader to emerge. Shaloh says they’ll know when they see him.

Suddenly a van drives into the square. The brunette waves goodbye as she hops inside to be shuttled to another attraction, but I’m not eager to leave. I want to know more. I ask Shaloh if he would mind chatting with me for awhile, and Shaloh says he has nowhere to be. We sit on a rock outside the only residential house in the marae, sandwiched between the church and the dining hall. This is Shaloh’s family home. He tells me that growing up, many of his non-Maori friends were wary of going to his house knowing there were graves next door, a concern he answered with something his grandfather used to say, “You never have to worry about the dead. It’s the living you have to worry about.”

As we sit down, I sheepishly confess that I didn’t expect him to be Maori when I first saw him. Not surprised,  Shaloh explains that people often mistake him for being Middle Eastern or Hispanic. Growing up, the 43-year-old faced some prejudice in school both for being Maori and for “not looking” Maori, but he always knew who he was. “Generally, we’re proud of everything that we are,” he says.

The marae is completely empty now except for Shaloh and me. As I listen to him talk into the Southern Hemisphere winter night, my mind is buzzing with how lucky I feel to have one-on-one time with a real New Zealand Maori. I extensively researched authentic Maori cultural experiences before coming to New Zealand, but all I found were expensive dinners-with-a-show and tours of model villages. I didn’t learn of Ohinemutu until a few hours ago when I glanced at this one flyer out of the countless others in my hostel lobby as I waited to check into my room. Shaloh says the attractions I saw online are all “completely fictional,” and their popularity promotes a Maori culture steeped in stereotypes. “People come here, and they expect to see us walking around in grass skirts with tattoos on our faces living in thatched huts,” Shaloh says with a chuckle. In contrast I point out the Cavaliers hat, and he admits being a big LeBron James fan.

Despite all Shaloh taught me about Maori culture on his tour, he tells me that with Westernization, their way of life is disappearing. Shaloh has fond memories of growing up in Ohinemutu, and he wishes other Maori shared his experience. Today he misses the extent to which the villagers lived a communal lifestyle. He recalls a particularly poignant memory of something that happened often throughout his childhood: A lone fisherman would feed the entire village, starting with the elderly, then the families with lots of kids, and finally everyone else, leaving only a few pieces of fish for himself. “You don’t see that anymore,” Shaloh laments. The absence of a chief hasn’t helped these changes, but Shaloh has faith the village will be okay, he says. “Everything goes through a cycle, and I’m relatively confident that something good will come out of it in the end.”