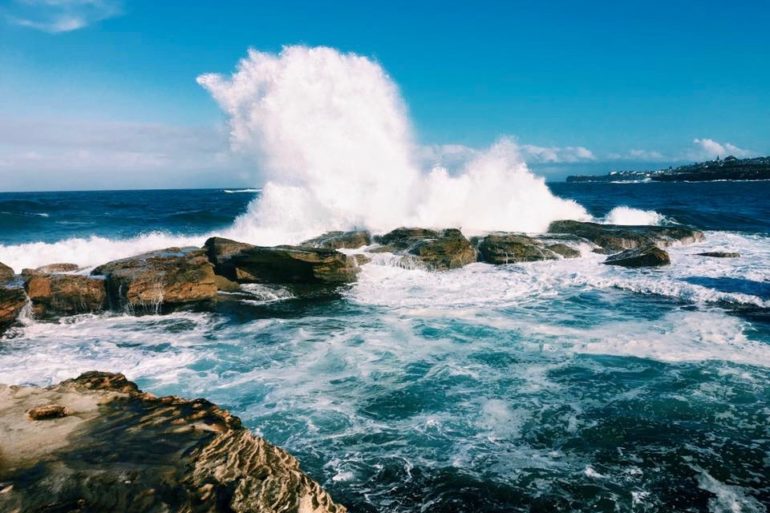 You’ll want to visit ALL of them.

As a gateway to the Great Barrier Reef and the Whitsunday Islands, the coastal town of Airlie Beach is chock full of stunning beaches. Make sure you go snorkeling or scuba diving to see the corals of the reef! Or, take a sailboat out onto the water if you don’t like going underwater.

One of Tasmania’s most famous conservation areas, the most scenic area of the Bay of Fires is located in Binalong Bay. In particular, head to the Gardens for especially beautiful views of the bright orange lichen growing on the rocks lining the bay, pure white sand, and clear blue waters.

Bondi Beach is an Australian icon, known for its surf-worthy waves, But if you don’t feel like venturing into the water, you can always go for a stroll in the pristine, white sand, lounge around on a towel for awhile, or check out the row of ever-changing murals just before you step onto the sand.

About 15 km away from Melbourne CBD lies one of Australia’s most famous beachside towns: Brighton. While you splash around in the ocean, take in the vibrant rainbow of the beach’s Instagrammable bathing boxes.

Unlike most of Sydney’s beaches, Camp Cove in Watsons Bay faces the harbor, so you can enjoy skyline views while you swim in the ocean. The water is also great for snorkeling, kayaking, scuba diving, or simply relaxing.

Located a 30-minute walk away from the University of New South Wales, Coogee Beach is especially popular among university students. You can swim in the ocean as well as the several coastal pools in the area.

Coolangatta is Queensland’s southernmost beach town. It shares most of the same features as Surfers Paradise to the north, but at a calmer pace.

A mere 45-minute ferry ride from Cairns, Fitzroy Island’s shoreline is characterized by beautiful coral beaches and lush rainforests. The island is a prime location for exploring the Great Barrier Reef, so make sure you do some scuba diving or snorkeling while you’re here.

Part of Great Sandy National Park, Fraser Island hosts most of the park’s highlights, including Lakes Mckenzie and Wabby, the SS Marino shipwreck ruins, the rock pools, and more.

The vast beach in the Adelaide suburb of Glenelg, is great for sea shell hunting, swimming, going for a stroll down the pier, or simply watching a sunset.

At the Gold Coast, skyscrapers meet the surf for a vibe that’s both urban and beachy. Think of the Gold Coast as being like Australia’s Miami. The city actually includes beach towns along the coast, but the most iconic of them all is Surfers Paradise. Any of the others nearby are just as good, though!

Accessible from Gladstone, Heron Island is a World Heritage-Listed Marine National Park located at the southern end of the Great Barrier Reef. The island is famous for its 20+ snorkeling and scuba diving opportunities. Named after the herons that live here, the island is also teeming with wildlife.

Located on the Great Ocean Road, Lorne Beach is a popular site for surfing. At the surf shop right across the street from the beach, you can rent a surfboard and wetsuit for $20 per two hours.

Possibly Queensland’s best-kept secret, Magnetic Island is only a 25-minute ferry ride away from Townsville. Drive around the island in colorful Barbie-like cars, collect sea shells, go snorkeling in the ocean, and visit the Bungalow Bay Koala Park hostel (or better yet, stay overnight there) to see a variety of resident iconic Aussie animals.

Manly is one of Sydney’s iconic surf beaches, but you can also play some beach volleyball here with your mates, swim in the water, and marvel at the street art just off the sand.

Colored by turquoise water and orange-purple sunsets, Moreton Island has several features that make it special, including sand dunes perfect for climbing and — if you really feel really adventurous — “surfing” back down, and the shipwrecks on Tangalooma Beach.

Affectionately known as Straddie by the locals, North Stradbroke Island is known for its surf, wildlife, and uniquely beautiful landscapes, like sand dunes and the famous gorge walk.

You also can’t go to Noosa without spending some time in the surf and sand, and Noosa Main Beach is the most popular place to go for it.

On the southern tip of beautiful Tomaree National Park, One Mile Beach is known for its surfing opportunities.

An hour’s drive north of Cairns CBD sits the idyllic oceanside town of Port Douglas, which features pristine beaches and access to two heritage-listed sites: the Great Barrier Reef and the Daintree Rainforest.

Although it gets less attention than the Fraser Island section of Great Sandy National Park, Rainbow Beach is still beautiful, too!

Only 6km from Melbourne CBD, St Kilda is known for its colony of little blue penguins have made themselves at home at the base of the pier, heart-stopping sunsets, and of course, ocean waters perfect for taking out a fishing boat, paddle boarding, playing beach volleyball or cricket, going for a swim, or simply relaxing.

Although the ocean is less than an hour away, you don’t have to leave Brisbane to go to the beach. Located in the South Bank Parklands, manmade Streets Beach brings the sea to the city. Soak in skyscraper views as you soak in the sun and wade in the water.

Located in the Whitsundays — one of Australia’s most famous locations for exploring the Great Barrier Reef — Whitehaven Beach, with its pure white sands swirling through turquoise water, is a tourist favorite.