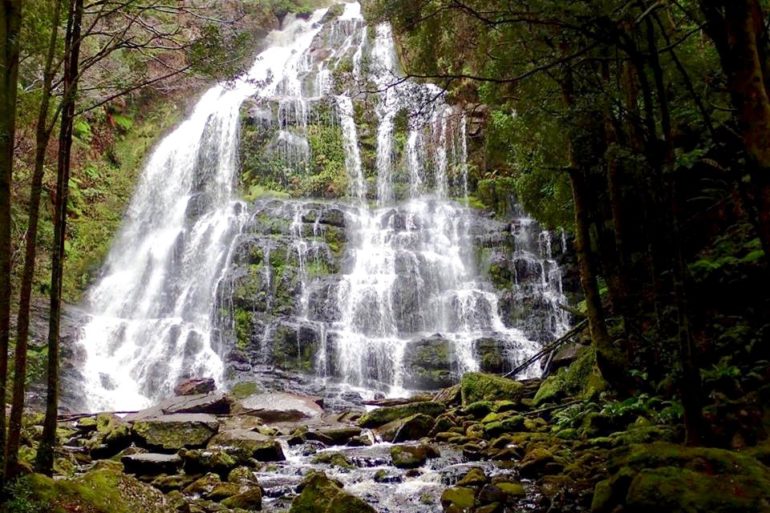 15+ Waterfalls to Chase Down Under

Sorry TLC, there’s no sticking to the rivers and lakes that you’re used to when these falls are so pretty.

Barron Falls is one of the main highlights of Barron Gorge National Park in the Wet Tropics World Heritage Area. The waterfall, located in Kuranda, is easily accessible from Cairns.

Located in Cradle Mountain-Lake St Clair National Park, Crater Falls isn’t the most impressive waterfall on this list — really more of a series of small cascades — but still a pretty sight to see while walking the Overland Track.

Unfortunately there’s no food at Dinner Falls, but the picturesque waterfall — about an hour’s drive southwest of Cairns — makes Mount Hypipamee National Park worth a visit.

A tiered-cascade waterfall, Horseshoe Falls is one of a handful of waterfalls located in Tasmania’s Mount Field National Park.

Huka Falls — New Zealand’s most-visited natural attraction — is located on the Waikato River which drains into Lake Taupo. When the river narrows to one-fifth of its size at a gorge for a 20-meter drop, the result is massive amounts of water rushing through the gorge and into a blue-green pool. Definitely one of the most unique falls Down Under.

Katoomba Falls is one of the main highlights of Blue Mountains National Park about 2 hours away from Sydney. in the Wet Tropics World Heritage Area. The waterfall is easily accessible from the Katoomba entrance of the park.

Kitekite Falls is one of the standout features in the Waitakere Ranges Regional Park, located in the seaside town of Piha, about a 45-minute drive from Auckland.

A tiered-cascade waterfall, Lady Barron Falls is one of a handful of waterfalls located in Tasmania’s Mount Field National Park.

Although only a tiny stream of a waterfall is pictured here, Lamington National Park is known for its waterfalls, including Coomera, Elabana, and Morans.

Located in Grampians National Park in Victoria, MacKenzie is one of the grandest waterfalls on this list, featuring water cascading over gorge cliffs into a huge pool.

Somehow not part of a national park, the heritage-listed Millaa Millaa Falls is perhaps the most photographed waterfall in all of Australia. The water is also a popular swimming hole, and while you’re here, see if you can spot any platypuses or bright blue Ulysses butterflies.

Possibly one of the best natural roadside attractions out there, you’ll find Nelson Falls located at the end of a small street just off Lyell Highway. If drive all the way out here for the falls, or even just stop to see them while passing through, you’ll be glad you did.

Purling Brook Falls is just one of the handful of breathtaking waterfalls you’ll find throughout Springbrook National Park in southeast Queensland. Another highlight includes the waterfall that flows into the cave in the Natural Bridge area of the park.

Before the establishment of Mount Field as a national park in 1916, Russell Falls alone became Tasmania’s first nature reserve in 1885. Today, the large tiered-cascade waterfall still stands as the crowned jewel of Mount Field.

Although known mainly for its volcanic activity, Tongariro National Park also has its fair share of waterfalls, such as the dramatic straight-drop Taranaki Falls that flow into a turquoise pool. The falls can be accessed from the Taranaki Falls Track.

1 thought on “15+ Waterfalls to Chase Down Under”