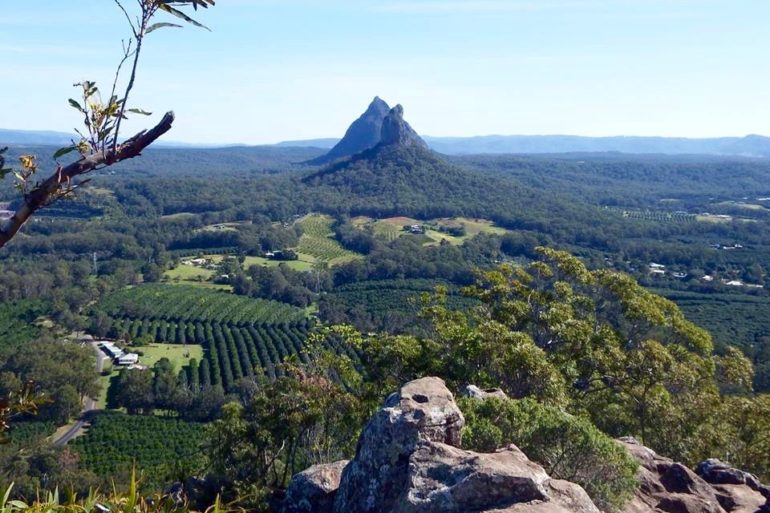 One of Sydneysiders’ favorite day trip destinations, the World Heritage-listed Blue Mountains sit just over two hours outside of the city. In particular, make sure you see the famous Three Sisters rock formation and Katoomba Falls while you’re here.

Part of a massive wilderness heritage area covering a fifth of Tasmania, the park is known for rainforests, glacial lakes (such as St Clair), Aussie wildlife, streams and waterfalls, and the Overland Track, which begins at Cradle Mountain.

Crater Lakes National Park’s Lake Eacham, a volcanic crater that filled with water, is so blue and clear that it mirrors the surrounding rainforest on its surface. The 3km walking track around the lake offers some of the best views of the park.

The park’s massive fig tree is a special sight to behold. Located in an endangered mabi forest, the tree’s long roots drop from 15 meters above down to the forest floor, creating a “curtain”.

A mere 45-minute ferry ride from Cairns, Fitzroy Island’s shoreline is characterized by beautiful coral beaches and lush rainforests. Explore the rest of the island’s rugged natural landscape via walking trails, or dive underwater to witness the marvels of the Great Barrier Reef.

Freycinet is one of Australia’s most popular national parks. In particular, check out the stunning lookout points at the Cape Tourville Lighthouse, turquoise Honeymoon Bay, and the iconic, perfectly-shaped Wineglass Bay.

Formed by volcanic activity millions of years ago, the Glass House Mountains make an excellent day trip from Brisbane, just an hour away. The views of Mt Ngungun are especially breathtaking.

A few hours west of Melbourne, Grampians National Park is filled with walking trails leading to various lookout points and waterfalls, including the popular MacKenzie Falls at the northern end of the park.

Great Sandy National Park, which comprises Rainbow Beach on the Queensland mainland and Fraser Island just off the coast, is a favorite weekend destination of Brisbanites. Fraser Island hosts most of the highlights, including Lakes Mckenzie and Wabby, the SS Marino shipwreck ruins, the rock pools, and more.

Located an hour and a half from Brisbane, Lamington National Park is part of the Gondwana Rainforests of Australia World Heritage Area, which contains a huge chunk of the world’s rainforests. The park features a variety of waterfalls and lookout points with incredible views.

Possibly Queensland’s best-kept secret, Magnetic Island is only a 25-minute ferry ride away from Townsville.Drive around the island in colorful Barbie-like cars, collect sea shells, go snorkeling in the ocean, and visit the Bungalow Bay Koala Park hostel (or better yet, stay overnight there) to see a variety of resident iconic Aussie animals.

Mole Creek is famous for its karst landscape, formed by the erosion of limestone into a variety of landforms like sinkholes, ridges, gorges, and underground rivers. Marakoopa and King Solomons Caves are especially popular.

Colored by turquoise water and orange-purple sunsets, Moreton Island has several features that make it special, including sand dunes perfect for climbing and — if you really feel really adventurous — “surfing” back down, and the shipwrecks on Tangalooma Beach.

Tasmania’s first nature reserve since 1885 and one of its oldest national parks, Mount Field is particularly known for its skiing opportunities during the winter, but in the summer, it’s the best place to chase waterfalls.

Mount Hypipamee National Park — about an hour’s drive from Cairns — has two main sites: picturesque Dinner Falls and the Crater, an arresting, 82-meter deep volcanic pipe with a lake at the bottom. While you’re at it, explore the surrounding area’s several types of forests.

About an hour’s drive north of Brisbane, Noosa National Park features boardwalks along the turquoise ocean, magical fairy pools, and views of the nearby Noosa River.

One of the main highlights along the Great Ocean Road, Port Campbell National Park, located 3 hours away from Melbourne, is internationally famous for its wave-sculpted rock formations, including the instantly recognizable Twelve Apostles and Loch Ard Gorge.

Located on Tasmania’s eastern coast, Tasman National Park boasts some of the most majestic sea cliffs in the nation along with interesting rock formations. Some highlights include the Tasman Arch, the Blowhole, Fortescue Bay, and Fossil Bay Lookout.

Most of the areas within Tomaree are strictly protected, but a few highlights like One Mile Beach and the old lighthouse Point Stephens Light make this secluded coastline worth a visit.

A short ferry ride from Airlie Beach, the Whitsunday Islands National Park is one of Australia’s best locations for exploring the Great Barrier Reef. Whitehaven Beach, with its pure white sands swirling through turquoise water, is especially famous.