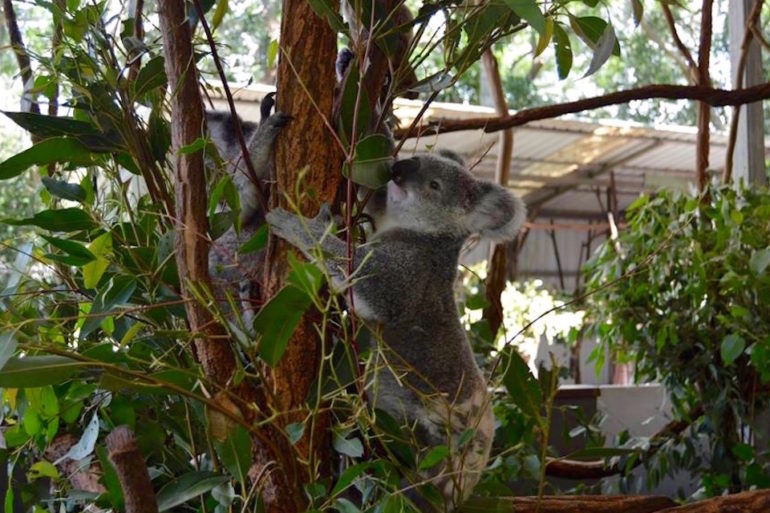 The best places to engage with the unique animals that call Australia and New Zealand home.

Run by the Irwin family, the Australia Zoo is the late Crocodile Hunter’s legacy. You can interact with more Aussie wildlife here than anywhere else, including koalas, kangaroos, wombats, dingos, Kimodo dragons (the only zoo in the world where you can do this), cheetahs, red pandas, meerkats, and more!

If you want to see Australia’s crocodiles, no need to look for Mick Dundee; drive 40 minutes north of Cairns to Hartley’s Crocodile Adventures, the best place in Australia to learn about the crocs. For the fearless, there’s the Big Croc Experience: For $130, you can hold a baby freshwater crocodile and even feed an adult crocodile yourself (not with your body, but with food attached to a LONG pole). You’ll see other Aussie wildlife here, including cassowaries, koalas, quolls (Australia’s lesser-known marsupial), and a variety of tropical birds.

If you want to ensure that you see a kiwi bird while you’re in New Zealand, what better place to go than Queenstown’s Kiwi Birdlife Park? Kiwis are nocturnal — not to mention, endangered — so normally it’s nearly impossible to find any during the day. But at the park, the kiwis live in houses designed specially for them. The buildings are kept pitch-black inside — your eyes will adjust — so that the kiwis think it’s nighttime and go about their usual activities. Then when the park closes at night, the lights turn on, and the kiwis go to sleep! You’ll find some of New Zealand’s other endangered birds here as well, like the whio (blue duck) and pateke (brown teal), in addition birds like the cheeky, mischievous kea — the world’s only alpine parrot — the vibrant green Antipodes Island parakeet, the red-crowned parakeet, falcons, and more.

Although it’s called a “koala” sanctuary, Lone Pine is so much more than that. Granted, the koalas are a pretty big deal; the sanctuary is the first ever for koalas and the largest of its kind. Lone Pine has 130 koalas, many of them available for you to hold for a brief, beautiful moment. This truly is the best place to interact with one of Australia’s most iconic animals. Aside from koala cuddling, you can also pet and feed kangaroos, feed the brightly-colored lorikeet birds, and marvel at other Aussie animals including emus, wombats, Tasmanian devils, dingos, and a variety of birds and reptiles.

Rainbow Springs is one of the best places to learn about New Zealand wildlife. When planning your trip, make sure you check the website to see what animal encounters are happening each day that week, since the park’s variety of up-close experiences with different animals don’t all happen every day. But no matter what day you go, you’ll get to see the iconic kiwi! Just make sure you’re at the park at 7:30 p.m. to meet the nocturnal birds as they awaken. Some of the other animals you’ll see include parrots, the cheeky kaka and kea birds, the ancient tuatara reptile.

Stradbroke Island — affectionately known as “Straddie” by the locals — is known for its wildlife, home to countless wild kangaroos, koalas, dolphins, turtles, and more.

Taronga in Sydney is one of Australia’s most beloved zoos. Here you can see a wide range of animals including giraffes, koalas, meerkats, red pandas, gorillas, pygmy hippos, blue-tongued skinks, and even the Rottnest Island quokkas!

Tasmanian Devil Unzoo provides an experience unlike any other as the world’s first intentional “unzoo,” a concept pioneered by two zoo design consultants who wanted to move away from the traditional zoo model of displaying animals in cages for human benefit. At an Unzoo, visitors are invited into natural habitats with cages either removed or as concealed as possible, and the animals are encouraged to interact with their environment. The idea is to give the animals more freedom and dignity while enabling visitors to have face-to-face encounters and learn more deeply about wildlife and nature. At this particular Unzoo, visitors can experience up-close animal encounters with a variety of animals, including — of course — the famed Tasmanian Devil.

While not the cuddliest or liveliest animals Down Under, the glow worms in the Waitomo caves are truly beautiful creatures. Witness their magic via boat tour, or wetsuit up, strap on a helmet, and go blackwater rafting on inner tubes and caving on-foot through the caves filled with the glowing turquoise worms that call this area home. (Yes, the glowing stuff they produce is technically their poop, but it’s so pretty that you won’t even care.)

Zealandia, located in the capital of Wellington, is the world’s first fully-enclosed urban ecosanctuary. The goal is to restore the area’s natural forest and freshwater ecosystems to their pre-civilization state as closely as possible. The folks at Zealandia have already made significant progress with 18 species reintroduced into the wild. You can see most of the sanctuary’s animals in the daytime, but come back at sundown for a guided night walk during which you’ll see rare creatures like the ancient tuatara, fluorescent glow worms, and — if you’re lucky — the adorable little spotted kiwi, the smallest of all the kiwi species.